Servicing and maintenance measures have a direct effect on the downtimes of a wind farm. If the downtimes can be reduced, unnecessary yield losses are avoided. In order to break new ground in the field of maintenance and repair, wpd windmanager GmbH & Co. KG and Aerones SIA have launched a pilot project with the „Robotic Blade Care System“ at the Dobberkau wind farm. In this project, the conductivity of the lightning protection system was measured with the remote-controlled robot arm developed by the Latvian company Aerones. „In addition to the conductivity measurement tested by us, the system is also suitable for repair work as well as coatings on the leading edge of the blade, for visual inspections of the blade surface and blade interior inspections or for cleaning work on the turbine,“ Axel Stelzer, Head of Technical Management at wpd windmanager, explains. With the robot arm from Aerones, wpd windmanager could reduce the downtime of the turbines even further in the future. „We see a lot of potential in this technology. In the future, we could save both time and money,“ explains Stelzer. 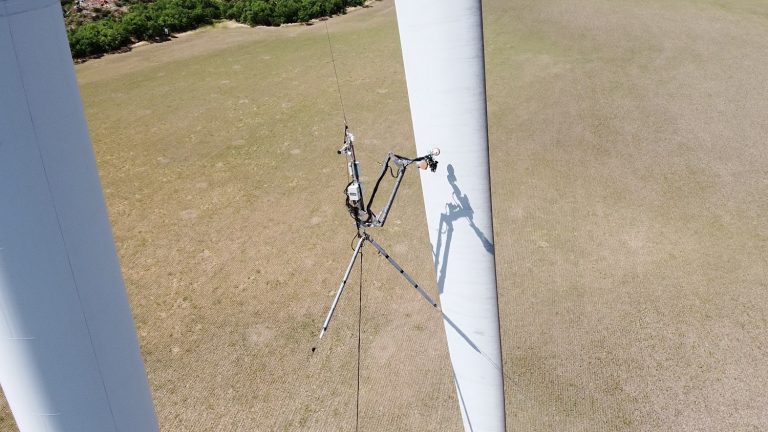 „We very much appreciate that the largest market players, such as wpd windmanager, recognize the value of such innovation and support our activities. wpd windmanager contacted us two years ago when our developments were still at a very early stage,“ says Dainis Kruze, founder and CEO of Aerones. „It is an honour for us to have the opportunity to demonstrate our skills in real projects on site. From a ‚crazy‘ and innovative idea we want to develop a new powerful way of blade maintenance and change the industry in the long run.

Together with Aerones, wpd windmanager plans further tests. This will enable them to further refine the processes and also the possible areas of application.